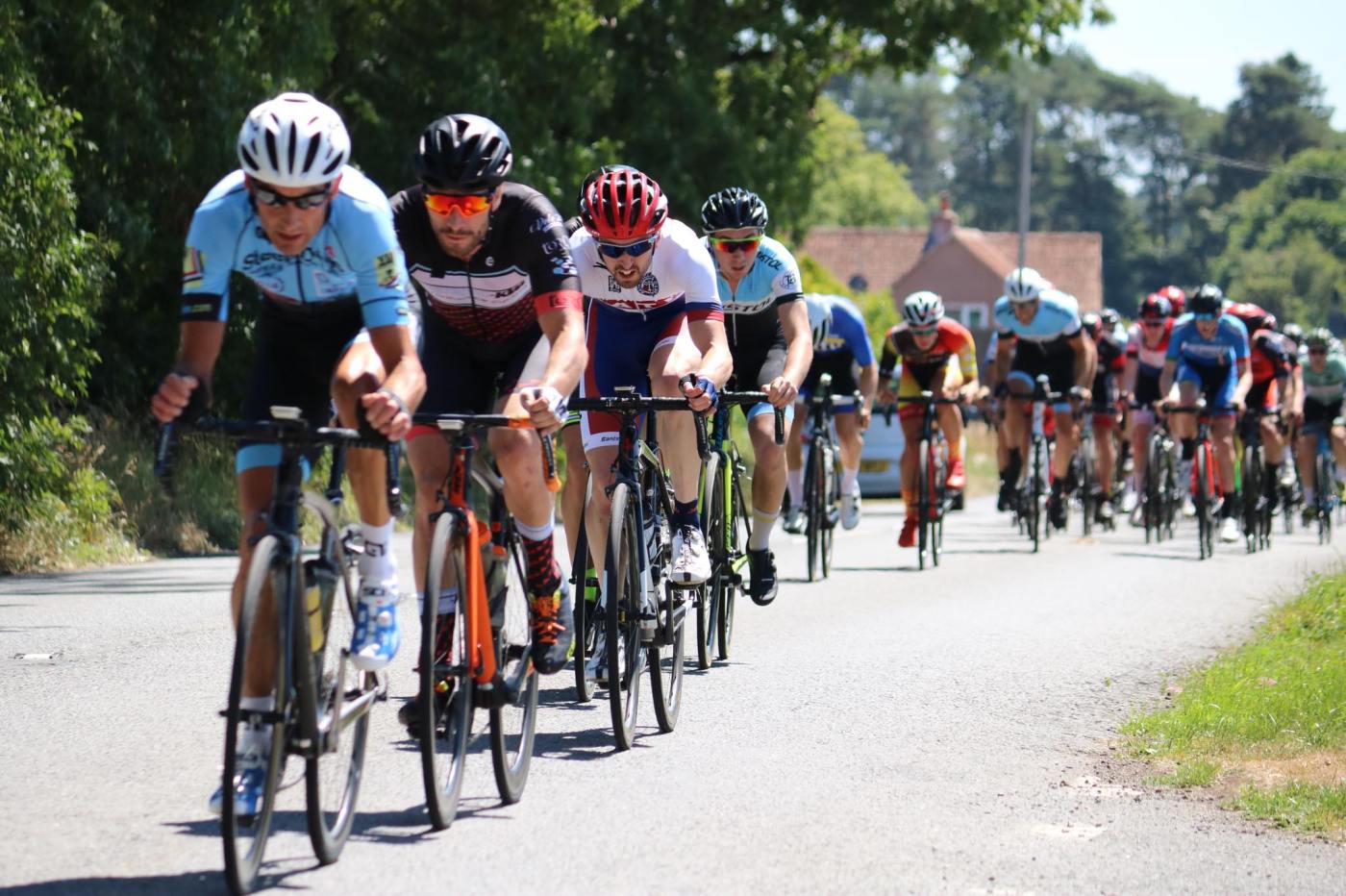 Last Sunday, full fields of men and women forewent their barbecues in the scorching weather to battle it out in the Bridge Too Far Road Races on a hilly circuit atop the Mendips. As the final round of the Cotswold League, there were hard fought inter-team rivalries as well as riders gunning for individual glory. As it was my last road race of the year, I was determined to cross the line with nothing left in the tank, and I certainly managed that.

When we arrived at the circuit we caught a glimpse of the women’s race cresting the climb. The fragmented bunch and array of pain-faces were a good indicator of things to come. A strong tailwind blew up the climb, negating any advantage of hiding in the bunch and providing the perfect springboard for attacks on the several steeper ramps. The headwind on the opposite side of the course threatened to stretch the bunch into echelons. It looked like the perfect day to try to smash the bunch to bits.

In the Cotswold League standings, BRC’s Andy Edwards held the top spot going into the race by a few points from Jack Webb of the Army Cycling Squad. With an on form James Phillips and breakaway smasher Shaun Cook among the numerous Bristol riders, the pressure was on for us to get men up the break. With the league cut to six scoring rounds after a series of cancellations, I could no longer challenge for the top spot so I decided to make my life and everybody else’s as hard as possible.

Attacks flew from the gun, with George Beck of Bikestrong KTM and Jacob Aries of Primera Teamjobs opening a small gap on the first lap. BRC’s Billy Hill brought Jacob back in time for the second ascent of the climb, which saw riders setting a fierce tempo on the front. Myself and Shaun Cook launched off the front to join George on the steepest part of the climb, but could only survive for half a lap as a well organised chase from the Army Squad reeled us in.

Attacks came from TT specialist Shaun Townsend (VC Equipe Flix), Patrick Clark (B38/Underpin Racing) and Richard Cleaver (VC Montpellier) but were unable to establish a gap. On the fourth of eight laps the pace eased as nobody seemed willing to push on into the headwind, so myself and Tom Grigson (Bikestrong KTM) chipped off the front. We worked well together to quickly build an advantage, until disaster struck and Tom clattered into a hidden pothole, sending him over the bars at speed. I just about avoided his wheels, and looked around somewhat confused as to what I should do. With about 45 km left I’d almost certainly get reeled in, but there was also a chance I’d be joined by more escapees at some point soon. I decided to engage my inner Thomas de Gendt and put the hammer down solo.

It wasn’t to be, and after a long and incredibly hot lap on my own, I was joined by a trio of riders before we were mopped up by the Army-led peloton. The pace dropped again and the same trio was allowed to ride off the front. Evidently BRC riders were the ones being marked, but undeterred I tried to bridge across, on my own again. By now my legs were completely ruined and it was clear the bunch were having none of it as they nullified our efforts on the fourth ascent. I could do nothing except cling on for grim death and watch a flurry of attacks stretch out the bunch.

With two laps to go the bunch fractured decisively on the climb as a group got away, containing Cotswold League contender Jack Webb, along with Colin Parry and Shaun Cook of BRC. With the two largest teams represented, there was no way this one was coming back. James Phillips and Andy Edwards sprinted across the gap to keep Andy’s league hopes alive. The chase abated, and the group of nine quickly amassed a lead of a minute. By now I was dehydrated and completely cooked, so I accepted my fate and settled into the bunch to try to survive to the end. At this point, the bunch was down to about 40 riders, with many having been dropped on the climb or roasted by the heat.

On the final lap we caught sight of the break, and with Shaun Townsend piling on all of his time-trialing watts it looked for a moment as though it would come down to a mass sprint with only a few hundred metres to the line. The break held on by the tightest of margins, James Phillips crossing the line with a few bike lengths to spare ahead of Patrick Clark and Jacob Aries. Jack Webb put in another great ride to finish fourth, while Andy could only watch as his legs cramped in the finale to lose the Cotswold League lead with the final throw of the dice. A thrilling end to the league, and a bitter one for BRC having led the standings from the off. Andy has ridden superbly this year and would have been a thoroughly deserving victor, but all credit to Jack and the Army boys for their stellar teamwork and strength throughout!

Overall, I can’t help but be pleased to see a BRC victory at our home event, and to have given it my absolute all even if it wasn’t my day. Once again this event proved to be one of the toughest and most animated of the season, and a real showcase of regional racing talent. The team of organisers and volunteers led by Matthew Blackmore deserve a huge pat on the back. I’m pleased to be hanging up the racing shoes for the year to enjoy a bit of R+R, as well as some riding for riding’s sake after a frenetic few months. Stay tuned for a full season round-up coming soon!

This site uses Akismet to reduce spam. Learn how your comment data is processed.

Follow our rides and join the club at N+1.